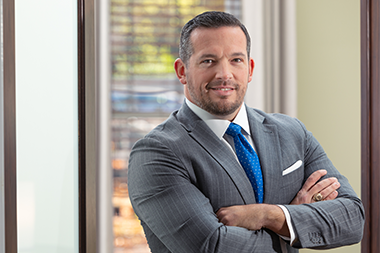 Attorney Jason Reynolds has a passion for helping people. Along with his work in the community and schools, Jason channels his passion for helping injured people get the medical treatment they need and fair compensation from those that caused their injuries. To that end, Jason has handled complex personal injury cases for well over a decade. Jason began his legal career with a large firm, where he spent eight years practicing on the defense side of personal injury litigation (primarily defending large corporations and national trucking companies in catastrophic injury cases). His experience on the defense side gives him a unique perspective and knowledge base which he now uses to maximize the results for his clients. Jason focuses his practice in the areas of personal injury, wrongful death, tractor-trailer accidents, serious automobile accidents, premises liability (slip and fall), and nursing home abuse and neglect.

Born and raised in Columbia, SC, Jason received his B.A. from The Citadel in Charleston, SC, and J.D. from the University of South Carolina in Columbia. Jason is also heavily involved in the community serving on multiple committees for the City of Columbia and on the governing boards for Young Life Columbia Downtown and Haiti Under God. Jason lives in Columbia with his wife Anne and their four children; Allison, Eliza, Emma, and Charlie. A competitor at heart, when he’s not practicing law you can find Jason coaching one of his children’s sports teams or coaching football on Friday nights in the fall for Ben Lippen School. I was impressed with his knowledge and experience, which far exceeded my expectations. His paralegal was also an MVP.

- Christian
CONTACT US TO DISCUSS YOUR CASE FOR FREE