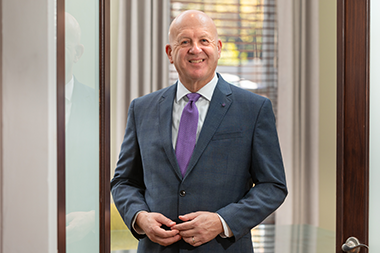 Attorney Stephen B. Samuels founded Samuels Reynolds Law Firm on the principles of hard work, dedication and service to families dealing with serious personal injuries. The mission statement – We work for the people who work – reflects his respect for the people who do the difficult, sometimes dangerous work that keeps our families together and communities thriving.

Stephen graduated from the University of North Carolina-Wilmington in 1983 with a degree in business management. For the next ten years he worked real jobs, including restaurants and HVAC, where he learned the reality of physical labor and the value of hard work.

Inspired by his younger sister who became a lawyer at age 30, he enrolled in the University of South Carolina School of Law in 1994. He received his JD in 1997 from USC Law when he was 38 years old. As a law student, he was a member of the Order of Wig and Robe, and Associate Symposium Editor for the South Carolina Law Review. Stephen was a research assistant for Professor David G. Owen, coauthor of Prosser and Keeton on Torts.

After law school, Stephen worked as an attorney for a larger law firm in the midlands. In August 2008, he left that firm and opened the Samuels Law Firm. He decided to keep the firm small to ensure personal service and allow enough time to give individual attention to his clients.

Stephen has tried hundreds of workers’ compensation cases, concentrating on legally complex issues. He speaks several times a year at workers’ compensation seminars and conferences. Stephen also handles personal injury cases, including trying cases before juries. He is an active appellate lawyer who has appeared before the South Carolina Supreme Court and South Carolina Court of Appeals.

Originally from Cape Town, South Africa, Stephen lives in Columbia with his wife Angi and their three dogs (Fergus, Tristan, and Spektor). He loves paragliding, travel, reading, Gamecock sports, art, music, and food. When not working in the law firm, Stephen and Angi travel together to such far-flung destinations as South Africa, Costa Rica, Japan and Iceland. Samuels Reynolds Law Firm treated me like family from the beginning to the end of representing me. They treated me with respect. They were always there with close and personal contact. They relieved me of all the stress of legal matters that I myself didn't always understand, returning phone calls, and seeing me when needed. I will highly recommend them to all my family and friends. Thanks Mr. Samuels, Angi, and Katherine.

- CENTERIA HILL
CONTACT US TO DISCUSS YOUR CASE FOR FREE